Changes at the top for TCL Packaging

Home Changes at the top for TCL Packaging 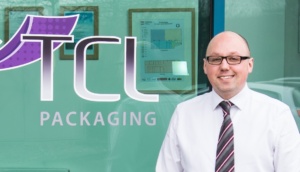 NEWS – Changes at the top for TCL Packaging

The move came after current managing director and majority shareholder Mike Golding took a decision to stand down from a day-to-day role during Summer, 2017 and become Chairman of the business as it moves into its next growth phase.

Golding comments “One of the key aspects to leadership is knowing when the time is right to hand over the baton. TCL Packaging is a dynamic and exciting packaging films business with a dedicated team and a fantastic future under Mark’s stewardship. In my new role as Chairman, I can continue to support and guide the long-term future of the business but also free up time for family and other non-work pursuits”

Clayton, 38 brings strong skills in strategy and development with a consistent record of delivering outstanding results in revenue growth, operational performance and profitability.  He has significant financial expertise but his strongest suit is people development and building winning teams.

He was UK director for engineering thermoplastic business Teknor Apex for seven years which was acquired by Petlon in 2015.  Responsible for the integration process, Clayton then became head of the new organisation but, after 18 months of commuting to Gloucestershire, desired a better work/life balance.  The birth of his third child at the end of 2016 was the catalyst for change. “My family are settled and happy in Staffordshire” he said “which made the TCL role serendipitous”

Clayton continues “The printed film market is robust with huge potential and TCL has the production capacity to expand.  Various market drivers are in our favour; packaging light-weighting, the development of higher-technology polymer films and inks and the high emphasis on shelf-life and high shelf impact from brand owners. The future for TCL Packaging is very bright indeed”

Mike Golding took over the reins at TCL Packaging in 2009 and after a management buy-out in 2012 became majority shareholder and will continue his holding going forward.  The company has made significant capital investment in production equipment and in 2014 moved into a new 70,000 sq ft production unit, two and a half times the size of its previous Telford location.  During a long period of sustained growth TCL has become recognised as one of the sector’s leading independent printed film producers.

TCL are proud to maintain our status as an ASDA Approved supplier, supporting and supplying the food chain through this difficult period.

The annual audit was carried out today and once again was very successful. The auditor did make a comment that she could see that a…

We had our annual FSC ‘Chain of Custody’ audit today and we have retained our certification for another 12 months.

You’re not going to hit a ridiculously long phone menu when you call us.  Your email isn’t going into the inbox abyss, never to be seen or heard from again.  At TCL we provide the exceptional service we’d want to experience ourselves.

Contact Us
We use cookies on our website to give you the most relevant experience by remembering your preferences and repeat visits. By clicking “Accept All”, you consent to the use of ALL the cookies. However, you may visit "Cookie Settings" to provide a controlled consent.
Cookie SettingsAccept All
Manage consent

This website uses cookies to improve your experience while you navigate through the website. Out of these, the cookies that are categorized as necessary are stored on your browser as they are essential for the working of basic functionalities of the website. We also use third-party cookies that help us analyze and understand how you use this website. These cookies will be stored in your browser only with your consent. You also have the option to opt-out of these cookies. But opting out of some of these cookies may affect your browsing experience.
Necessary Always Enabled
Necessary cookies are absolutely essential for the website to function properly. These cookies ensure basic functionalities and security features of the website, anonymously.
Functional
Functional cookies help to perform certain functionalities like sharing the content of the website on social media platforms, collect feedbacks, and other third-party features.
Performance
Performance cookies are used to understand and analyze the key performance indexes of the website which helps in delivering a better user experience for the visitors.
Analytics
Analytical cookies are used to understand how visitors interact with the website. These cookies help provide information on metrics the number of visitors, bounce rate, traffic source, etc.
Advertisement
Advertisement cookies are used to provide visitors with relevant ads and marketing campaigns. These cookies track visitors across websites and collect information to provide customized ads.
Others
Other uncategorized cookies are those that are being analyzed and have not been classified into a category as yet.
SAVE & ACCEPT